Remembrance Day #Marlborough Lest We Forget. By Evan J and Evan L.

Throughout the half term all the pupils have been working hard trying to expand our knowledge of WW2, as you know we have been learning about WW2; each pupil has participated in putting together a lovely poppy to represent those who served our country during WW2 .

The reason that we have a 2 minute silence every 11th of November is to remember those who gave their lives for ours, so we must be grateful for those who wielded the nobility to fight for freedom.

Our project ended on 11th of November (Remembrance day) we had another immersion day on Monday The 11th of November . As you may know, ITV Wales came in to  film us; our 2 minute of silence and our performances representing WW2.

We thank those who took part in making a poppy and we thank the teachers who took us back in time to World War 2.

Remembrance day is a day to remember people who fought and died in wars. It is on November 11th. On that day in 1918 came the end of World War I with Armistice with Germany. Remembrance Day was started in 1919 by King George V of the United Kingdom.

It is a remembrance day for every war but it was started because of WW1 which is a fact that a lot of people get commonly wrong by mistaking it with WW2.

Two-minute silence. At 11am on each Remembrance Sunday a two-minute silence is observed at war memorials and other public spaces across the UK. … It came to symbolise the end of the war and provide an opportunity to remember those who had died.

Rollo and Maisie by Skye and Ava

An interview with Amari about when he walked Rollo and Maisie 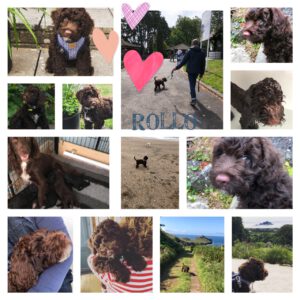 When you walked Rollo what did it feel like and why?

When you walked Maisie what did it feel like and why?

It felt fun because every time you threw the ball to Maisie she would run right past it and she makes me laugh all the time.

We interviewed Miss Foley about Rollo:

I think Rollo has settled in very well he gets very excited when he comes to school and he runs down the road with the waggiest tail you have ever seen. One thing I have to work on is making sure he has enough naps. He is so excited in school he doesn’t go to sleep.

Meet the chickens! by Martha and Hadley

In the garden you may have noticed that we have 4 new feathery members of the Marlborough family, they are chickens! They do not have names yet but hopefully they will soon. What would you call them?

What was your favourite activity? I enjoyed the blind trail because of the teamwork involved in it.

What was your least favourite activity? Abseiling because of the heights and the fear of slipping.

What did you think about your room? A bit cramped for 6 people.

What did you enjoy doing while the rest of year 6 were in manor?  I enjoyed getting to know the year 2s.

What did you least enjoy? Not being able to see my other friends.

Did you do any fun activities that you wouldn’t do normally? Movie night was really fun!

Which teachers taught you? Mrs Combes and Mrs Underwood