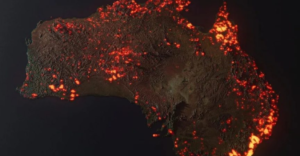 Australia was all normal until the temperatures rose and that’s when the fires came they were little fires and then more and more came. People have been forced out of their homes, more than 30 people have lost their lives and several animals too, such as Australian natives animals. As you can see in the map above Australia bush fires are devastating the country. It is very sad . One woman took her top of and saved a cute ,innocent  koala that saved his life and poured two bottles and took it to the local koala hospital and unfortunately it had to many burns so it passed away, people  are saying she is a hero it has gone viral around the world. A dozens of news stations have seen this video such as the guardian , BBC news and the echo. We are going to have an Australia Day so you can dress in Australian clothes and bring one pound in to wear Australian clothes . After school were holding a bake sale so if you want you can buy or make your own cake, and that money will go to Australia and will help to hopefully stop the fires and get Australia back to normal.

Rollo is an excited small (well not that small) 8 month old puppy. Incase you don’t who Rollo is I will show you an interview on Rollo by me and Max

Rollo is a playful dog .As I write this Rollo is tearing through his red ball.I don’t know how Rollo got his spring from but he has got a big one.He is a good influence on our learning.

An interview with Jenkins about the Chickens – by Martha and Hadley

Q.Do the chickens have names?

A. No, I call then “my girls” because they all look the same.

Q. How many times do you feed them a day?

A. They have one big meal in the morning around 8:00 a.m. and then two little snacks during the day.

Q. What do they eat?

A. The eat cabbage, swede, noodles, rice, mealworms (which are full of protein).

Q. Do you think the children enjoy having the chickens?

A. Yes, the children in Foundation Phase are especially fond of them

Character Strengths by Skye and Mollie

Today I have been working on the character strength of persistence. Earlier on today my bed was really messy, with all my stuff on it but I kept on trying and at the end it was amazing! Molly

We have interviewed someone from 5M called Evie

Q: What is the character strength you have been working on this week?

Thank you for reading our article

Everything that I am thankful for – by Bianca

I am thankful for the school and for the teachers. I am also thankful for all I have got and food  and not having to miss school  because I am sick or got the flu .

Let’s Play – by Alice and Evie

On Friday 10th January we interviewed a pupil from 5MC we asked lots of questions about the new topic Let’s Play. For this occasion 5MC designed their own games. There were active games and board games but they could never have been made before. So they put their thinking caps on to brain storm new ideas. We used collaboration, persistence and even more to door challenge. After creating the games 5MC payed them to see if anything needed improving. They had to have an element of risk so it would be suitable for our age group. Some of them needed more risk but everyone worked the problems out.

How do you’ll the game went? It was fun, challenging and enjoyable.

What is the aim of the game? To avoid all obstacles (spikes, mud and question mark cards).

What made you want to create the game? We wanted it to be like a board game.

Marlborough has a  very interesting  new topic named Let’s Play. On Monday during our immersion day  we played games  like  board games and guessing  games . I think that we all really enjoyed it.